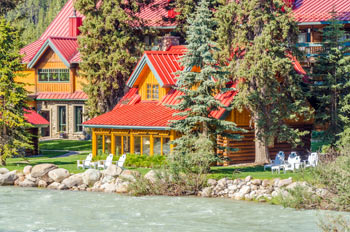 If you thought Canadian residential detached and semi-detached prices were out of control, take a look at Ontario’s cottage country.

Canada-wide prices have jumped 20.1 per cent year-on-year, with Greater Toronto rising 16.5 per cent and 6.8 per cent in Greater Vancouver, according to The Canadian Real Estate Association.

But they pale in comparison to prices in Ontario’s rest-and-recreation destinations, where residents have taken the idea of “remote” working too literally.

The Grey Bruce Owen Sound region has seen prices for single-family home jump 33.3 per cent during the period to $432,100, compared to the same period last year, according to CREA. The average price of homes sold in March was a record $646,488, a 44.9 per cent improvement from March 2020.

“The dollar value of all home sales in March 2021 was $217.9 million, more than double the levels from a year earlier, rocketing up 123 per cent from the same month in 2020,” according to the CREA. “This was a new record for the month of March and was also the largest dollar value of homes sold for any month in history.”

Bank of Montreal believes cottages are in a bubble, noting that the factors that have propelled this market to dizzying heights might be ready to crest soon.

“Vaccinations are broadening; listings are becoming more ample; and a different tone from the BoC has at least shifted the conversation a bit on interest rates (weekly surveys of price growth expectations have finally backed off a bit),” wrote Robert Kavcic, senior economist at BMO Capital Markets, noting that those who are buying homes in rural Ontario at these prices may be stuck with them for a while.

“Even if we build in some permanence because of things like work-from-home and scarcity of waterfront, it’s still not hard to see a scenario where froth comes out and the last buyers in (especially in a blind-bid scenario) are faced with years of negative equity.”

The region in Ontario, bordered by Lake Huron and Georgian Bay, includes Bruce and Grey Counties and part of Wellington County.

Total home sales in March surged to $137.9 million, more than double the levels from a year earlier, rocketing up 238.2 per cent from the same month in 2020. This was also a new record for the month of March, the Kawartha Lakes Real Estate Association Inc. noted.

Meanwhile, a single-family home in Lakelands — comprising Muskoka, Halliburton, Parry Sound and Orillia — will set you back by $536,100, an advance of 42.2 per cent year-on-year.

The Lakelands Association of Realtors reported that the value of all residential non-waterfront sales in March 2021 was $247.6 million, more than double the levels from a year earlier, leaping 175.5 per cent from the same month in 2020. This was a new record for the month of March and was also the largest dollar value of homes sold for any month in history.

Prices for waterfront properties shot up 64.5 per cent and non-waterfront by 44.7 per cent during in March, compared to the same period last year.

“Although, this helped to marginally ease market conditions, the seemingly endless pool of buyers pushed the average price to yet another all-time high. Surpassing the 700K mark for the first time,” said Jon Maxwell, president of the Peterborough and the Kawarthas Association of Realtors.

“If conditions remain the same, we expect the 11 month streak of double-digit year-over-year percentage gains in prices will continue into the hot spring market and possibly into the summer.”

Finally, the Southern Georgian Bay Association of Realtors, representing Wasaga Beach and Collingwood, among others, also reported that benchmark price were at $592,500 in March, a significant gain of 40.8 per cent compared to March 2020.

“While the recreational property market is certainly unique, valuations have never been this high when adjusted for interest rates and provincial income,” BMO’s Kavcic notes. “We fully appreciate that those things often don’t matter, especially for a high-end cottage, but they do provide a historical reference—and in that sense, we’ve almost flown off the charts.”