Usually, when Canada's housing market is this badly in the dumps, the country is in a recession, according to a research note from the Bank of Montreal.

Canada's economy ground to a near-halt at the end of 2018, according to data from Statistics Canada, with growth slowing to a 0.4-per-cent annual rate in the fourth quarter.

Among the weakest parts of the economy recently have been anything related to the housing market.

Residential investment, which includes building new homes and buying and/or renovating existing homes, has dropped 7.5 per cent over the past year, BMO senior economist Robert Kavcic said in a report earlier this week.

"Historically, declines of this magnitude in such an important sector have usually correlated with a broader recession," Kavcic wrote in a client note. He produced a chart showing a clear correlation (but not necessarily causation) between recessions and large declines in residential investment. 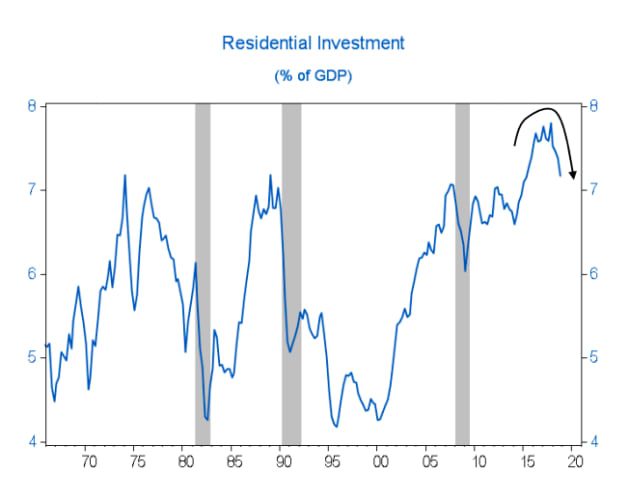 Kavcic noted that 1995 "was one false positive, but that wasn't exactly a jubilant time." That was the year of the second Quebec sovereignty referendum, and real estate markets in central Canada tend to be weak when Quebec talks separation.

The implication is that housing market slowdowns will have a bigger effect on Canada's economy than they would have in the past.

The Canadian Real Estate Association reported that countrywide home sales activity was 4 per cent lower this January than a year earlier. It was the weakest January for home sales in four years. Sales in the once-hot Toronto and Vancouver markets were near their lowest points since 2009, while markets on the Prairies continued to suffer from the recent upheaval in the oil markets.

Montreal and Ottawa have been bright spots for the market so far this year, with sales and prices on the rise.

The likelihood that rising interest rates and the tougher new mortgage rules have taken the steam out of Canada's housing and real estate industries is one of the primary reasons the Bank of Canada appears to have put its campaign of raising interest rates behind it, at least for now.

In its interest rate announcement Wednesday, the bank kept its key lending rate at 1.75 per cent. It dropped earlier promises that it would eventually return to raising interest rates, and said there is "increased uncertainty about the timing of future rate increases."

Traders took that to mean the bank had been spooked by the data showing a slowdown in Canada's economy. The Canadian dollar dove after the bank's announcement, dropping some 0.4 cents U.S. in minutes.