The average Canadian household paid nearly $40,000 in taxes last year, more than the combined cost of clothing, food and shelter, according to a new report.

The Fraser Institute’s annual Canadian Consumer Tax Index is meant to show how the tax bill has changed over time. Last year’s average tax burden of $39,299 is almost three times what Canadians paid in 1961, after adjusting for inflation – and has risen much faster than the cost of necessities, including housing, the institute said.

The authors calculated that the typical household spent just more than $32,000 on clothing, food and shelter in 2018. 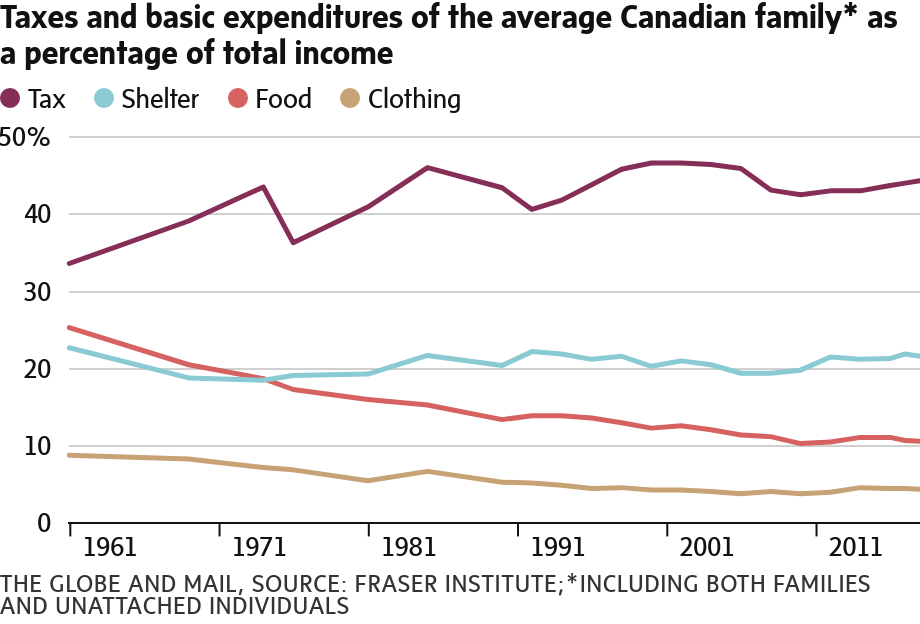 “When you look over a couple of generations, we've significantly expanded the scope of government,” Finn Poschmann, resident scholar at the Fraser Institute, said in an interview.

“If we want to continue supporting the scope of government that we do, we should remind ourselves just what the cost is.”

Since the early 1980s, overall rates have remained relatively stable, ranging between 41 per cent and 47 per cent. “The major expansion of government was between the 1960s and the 1980s, and it has so far proved durable,” Mr. Poschmann said.

The growth in household taxes, however, has supported the establishment of programs that most Canadians would consider essential, said David Macdonald, senior economist with the Canadian Centre for Policy Alternatives.

Other estimates of Canadian household tax rates are lower than the Fraser Institute’s. In 2017, the Broadbent Institute calculated that the typical Canadian family faces an effective tax rate of around 24 per cent.

A key difference in methodology is that the Fraser Institute includes a number of taxes not paid directly by Canadian individuals, but that are paid by businesses and may be buried in the cost of goods. 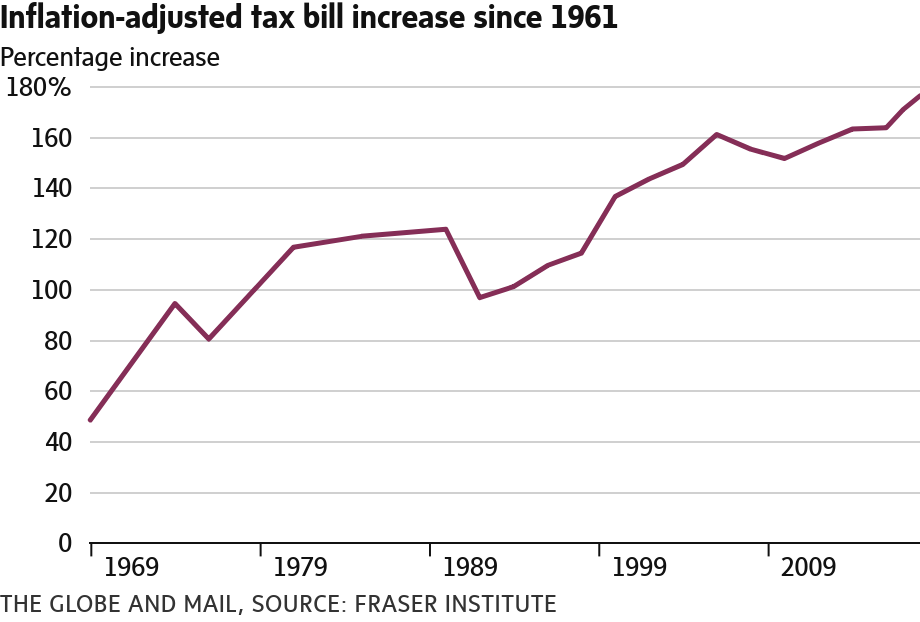 Mr. Poschmann argues that the cost of corporate taxes are ultimately borne by employees and consumers through lower wages and higher prices.

“Businesses don’t pay taxes, people do. That’s well founded in economic literature and tax theory,” he said. The report does not apportion Canadian families a share of corporate profits.

The report also draws attention to the gap between what Canadians pay in taxes and what they spend on essentials, including shelter, food and clothing, which account for 36.3 per cent of incomes. “Taxes – not life’s basic necessities – remain the largest household expense for families across the country,” the Fraser Institute’s news release said.

But as economies develop, the share of income taken up by spending on necessities tends to decline.

“I suspect it’s not uncommon among the Western welfare state countries,” Mr. Poschmann said. “We’re not big outliers. We’re neither an extremely high-tax country and we’re not a low tax country, either.